Home page
“This year, I can set my mind at ease”: How special safe houses are protecting people from floods
news-relate

Viet Nam’s 3,260 km-long coastline is a double-edged sword. While it blesses the country with abundant marine resources and huge potential for building a strong blue economy, every year Viet Nam's coastal areas face increasingly frequent and severe disasters such as storms, floods, and saltwater intrusion.

Quang Binh is one of the provinces most vulnerable to natural hazards. In 2020, it experienced two historic floods and a series of several powerful storms, flooding more than 100,000 houses and causing damage estimated at 3.7 trillion VND. In Le Thuy district, one of the most disaster-prone areas in the province, the people are especially used to living with floods; experience, however, does not make their lives any easier. Every storm season, many poor coastal households dream of having a solid and sturdy house that can resist the strong winds and rains so that they no longer have to worry about their homes, crops, and possessions being washed away by the floodwater.

“I am 74 years old, and I live by myself now that my children have settled far away. My old house is now in very poor shape. In 2020, I was supported by the local authorities and the project to build a resilient house, and now I feel a great sense of relief. Above all, a storm arrived right after the new house was handed over to me, so I felt very fortunate that I had somewhere safe to shelter.”

In order to help poor and disadvantaged households in disaster-prone areas, the project “Improving the resilience of vulnerable coastal communities to climate change-related impacts in Viet Nam,” financed by the Green Climate Fund (GCF) and the United Nations Development Programme (UNDP) and implemented in collaboration with the Government of Viet Nam, has been supporting coastal communities like Le Thuy district to build storm- and flood-resilient houses that can withstand the extreme weather they experience on an annual basis.

Mrs. Dieu's safe house has two floors of about 25m2. The ground floor is made of solid concrete, tiled floor, with a strong iron staircase leading upstairs. The upper floor includes emergency windows, and the corrugated iron roof is firmly attached to prevent it from blowing off in the wind.

During the historic floods in October 2020, the second floor of Mrs. Dieu's house became a shelter for many people in her neighborhood who could not safely stay in their own homes. Mrs. Dieu shares: "Thanks to this house, I was able to help my neighbors during the disaster, and especially many children from the village.” 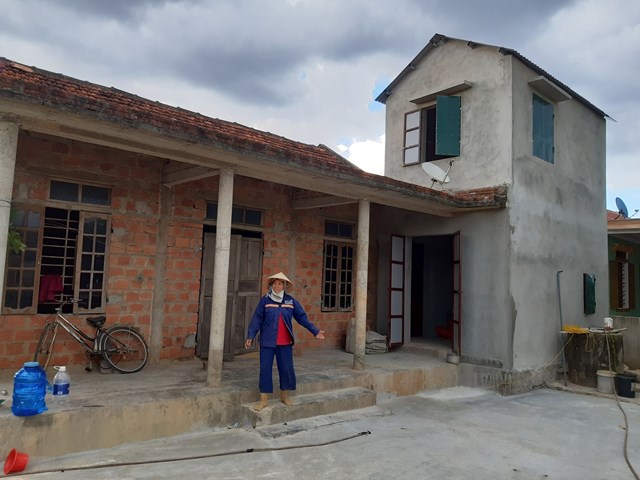 For the last three years, the project has supported Quang Binh province to build 897 storm- and flood-resilient houses. This safe housing model proved its effectiveness time and time again throughout the 2020 historic floods, protecting many others like Mrs. Dieu. According to Mr. Dinh Khanh Hau, Deputy Director of the GCF Project Management Unit in Quang Binh province, these resilient houses serve not only as shelter for family members, but also as small-scale evacuation points that can help neighbors in the surrounding area.

Mrs. Dieu’s neighbor, Mrs. Tran Thi Thiet, says that due to the rapid rise of the floodwater her house was almost completely submerged. All six people in her family had to evacuate to Mrs. Dieu's house for four days while they waited for the water to recede so they could return to their home.

"At the beginning of 2021, hearing from the commune that I would receive support to build a safe house made me so happy that I couldn’t sleep,” says Mrs. Le Thi Lan of Tan Thuy commune, Le Thuy district. Mrs. Lan also lives alone, and before she received a safe house she was forced to flee from the floods during the rainy season every year.

Building a flood-resilient house so that she would no longer have to worry about finding shelter was a dream that Mrs. Lan cherished for a long time. From now on, she can finally feel reassured whenever the storms return. “After four months of construction, the house was completed. This year, I can set my mind at ease living with the floods."

Support to build resilient houses is meaningful work to help poor households, disadvantaged families, and vulnerable people in the coastal areas of Quang Binh province. The project is continuing to build and hand over more houses to local people, helping them feel more secure during the storm season and striving to eliminate hunger and reduce poverty.